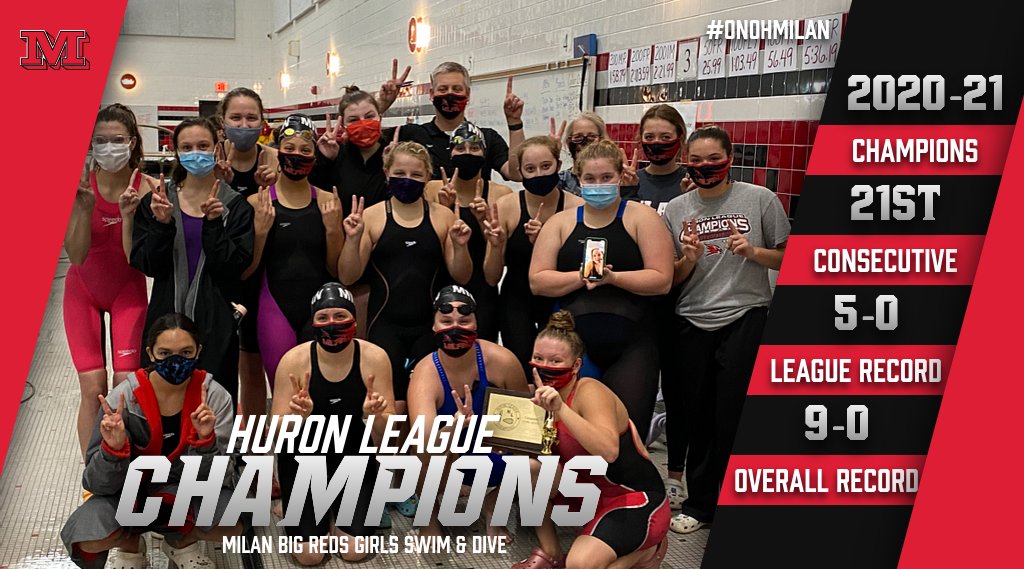 This is the Big Reds 21st consecutive Huron League title! Milan has now gone back-to-back years with undefeated regular seasons, with a 9-0 overall record, and 5-0 in league meets.

We claimed our 21st straight Huron League Championship today with a win of the Huron League Championship Meet held in Milan. It was an odd year and it continued today. The coaches all worked together to construct a set of rules that would allow us to hold an in person League Meet with all 6 teams present. We had no spectators, masks at all times (except for the athletes while competing), and many more rules and regulations. It did not damper the mood of the coaches and athletes, as the support of everyone was incredible. All teams showed incredible support for each other and cooperated to make the meet possible for our athletes.

We had a great night on the boards to open the meet Friday. Emily Huelke took the diving title, with Nadia Smith right behind in 2nd. Freshmen Stella Friese took 7th for the Big Reds, and had an incredible season for us. Emily and Nadia qualified for Regional and a chance to qualify for State Meet.

The swim portion of the meet today started with the 200 medley Relay. Our A relay of Eliana Malach, Rylee Mitchell, Mikala Muccino and Hailey Brady took 2nd, while our B relay of Krista Cook, Emma Kimbrell, Kam Stripp, and Reaghan Hines was 3rd.
The 200 Free saw season best times from Malach (2nd), Phoebe Rhoney (3rd), Jillian Rhoney (4th) and Laila Nemeth (7th). Phoebe and Elaina both made State Cuts.
The 200 IM was another strong event for us. Kam Stripp (4th), Rylee Mitchell (5th) and Emma Kimbrell (6th), and Olivia Stevens was 11th.

The 50 Free saw freshmen Annabelle Williams claim the title, with Hailey Brady in 3rd, Hines 5th and Nadia Smith of diving fame took to the lanes to swim and took 9th.
The 100 fly where we only had 2 girls, but with their 2,3 finish they added critical points. Kam Stripp (2nd) and Mikala Muccino (3rd) .

Next up was the 100 Free. Williams took another title with her win, while Krista Cook was 4th, Hailey Brady 5th and Molly smith took 7th.
The 500 free was a terrific event for Milan. Jillian Rhoney 2nd and Phoebe Rhoney (3rd) both made state cuts, while Laila Nemeth was 7th in her best time of the year.
Next up was the 200 free relay. we added another title with our A relay of Brady, Hines, Jillian Rhoney and Williams taking the win. Our B relay of Kimbrell, Mitchell, Muccino and Phoebe Rhoney was 4th.
The 100 Back was another win for us. Elaina Malach had a terrific swim for the win. Krista Cook was just off the State cut to take 3rd, and Olivia Stevens was 7th.
100 Breast saw Molly Smith out like a shot and came home strong to take 2nd. Rylee Mitchell was 3rd, and Emma Kimbrell was 4th.

The 400 Free Relay sealed the win for us and showed the girls motivation to put a stamp on their performance for the day. The A relay of Rhoney, Rhoney, Malach and Williams took the win. The B relay was lights out. A great leadoff leg by Mikala Muccino got us out with the pack, then Hines and Stripp put freshmen Krista Cook in a position to come back on the Riverview squad and she seized that opportunity. She had a great swim and they took 2nd to finish strong for the Big Reds.

The story all day was our depth. We had a very small team this year and in order to be successful the girls had to be versatile. The swam and dove their hearts out all year. We as a coaching staff are so incredibly proud of this group of young ladies. They started way back last Summer when the quarantine got lifted and while we could not swim, the whole team was at our dryland practice. Once we found some pool time, and it was 35 minutes away there were not deterred and made the drive get their training in. They were patient and dedicated while the MHSAA and State made us wait about having a season. Once we got back into our own pool, we had to adjust our training from the norm due to restrictions and safety rules. They never gave in and never gave up. This season was anything but normal. The girls handled it extraordinarily well, and made the best of the season they were allowed to have.

Thank you so much for all the support this season.
Recap by Coach Heikka